It’s a way of living and an inspiring beauty. Believe it or not, a playlist of a person tells you a lot about him. The kind of music he listens to say to you a lot about the type of person he is, just as music tattoo does. Music provides joy and happiness to the people. It allows us to escape the reality and go to some another world of your own. Even if it’s a heartbeat, but it’s incredible how much can do that and have a tattoo which represents that would be ideal. Music has undoubtedly influenced the tattoo art. 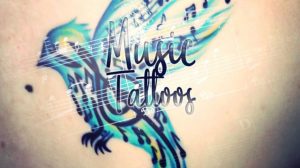 Let’s go back to our tribal culture where the people used to beat the hollow tree trunks of different sizes creating different sounds of high and low pitches. That sound is what the music meant to them, and that was the time where we tied music and tattoos together inspired by the music. We tied the music with tattoos as a virtue of ritual and spirituality.

The intersection of music and tattoo started with the inception of rock and massive metal culture. This practice is still alive. Musicians inspired by heavy metals get amazing tattoos on their arms or chest which look cool and is a part of fashion now. But back then it signified spirituality.

If you see, there are just tons of genera of music that you can’t even count. There is classical music, Rock music, Metals and what not. But there is one thing common about all of them is that they inspire people. Music is that one thing that gets into your heart, and it makes a difference to your life. Music motivates you towards your life. It inspires you to live your life. To alive and young just as music is never old.

Reason for Music Tattoos being in a trend could be that they are popular with both men and women. They could be worn by both men and women as both take an interest in music equally and they both contribute equally to the great history of music.

Today getting a tattoo of a band logo isn’t exactly in fashion but its more about the art. Though tattoo itself is an art so is Music. The tattoo has both lyrical arts from music and visual art from the tattoo. And when these two intersect, there’s always a great message hidden behind the tattoo. It can either come from the lyrics of any song or maybe through how the artist is portraying it.

There is another new trend in fashion that is youngers getting tattoos of the legendary old bands which were best at their time or any terrific performer or a great personality. David Bowie is one of the most popular examples where as ‘The Grateful Death, and the Rolling Stones, The Beatles are some of the most popular bands to be tattooed.

Music and tattoos can have also had more general intersection. While initially, Music Tattoos were mostly featuring an artist or a band, but now it’s more of an identity of oneself as a music lover through a tattoo which does merely that. Even a simple tattoo of a musical note, a record player or maybe of headphone shows your love for the music. They are small and can fit at any part of your body.

Followed by time, there have been tons of new designs coming up. Guitar being one of the favorite string instrument of all time is very popular. They have a variety of designs corresponding to different types of music, and they are available in various sizes too.

For example, a person who likes rock and metals would want to get a tattoo of an electric guitar with the pictures of skulls on them whereas someone who just like pleasant and slow music would prefer an acoustic guitar. Either way, it shows their love and passion for guitar and music of course.

And if you see, just through that tattoo it also tells you about the personality of that person. People just draw the tattoo of the instrument they like or the instrument they play conveying the same meaning. Whereas some people just draw the musical notes on their wrists which looks beautiful and classy. It doesn’t refer to any particular artist or any band but still shows one’s passion towards music.

Finally, the music itself an art and people are insanely passionate about it. For some, it’s an expression, and for some, it’s a way of living. It’s incredible how it can inspire people towards life. And when it is combined with the tattoo which itself is an art, it becomes a piece of art which conveys a message which you humanly can’t.

The information contained on Tattify is intended for informational and educational purposes only. None of the statements made on this website are intended to diagnose, cure, treat or prevent any disease, infection or illness. Please consult a healthcare practitioner before using tattoo/skincare products that may interfere with medications or known conditions. This article is provided with the understanding that it does not constitute medical or professional advice or services. If you are looking for help with your condition, please seek out a qualified medical practitioner.

As an Amazon Associate we earn from qualifying purchases.